Dropping Your Motorcycle: Perception Versus Reality

Motorcycling can be a metaphor for life.  I am currently fleshing out the Turkey book and I am rewatching the Journizer videos of the trip. In the episode I am going to embed in this post, I talk about dropping my motorcycle in front of about 80 bikers. I also remember it as being a massively humiliating event witnessed by half the bikers in Austria. But when I look at the picture that Patrick took of the café there is about 30 bikes or less! Of which 4 belong to the group we were riding with. Check it out: 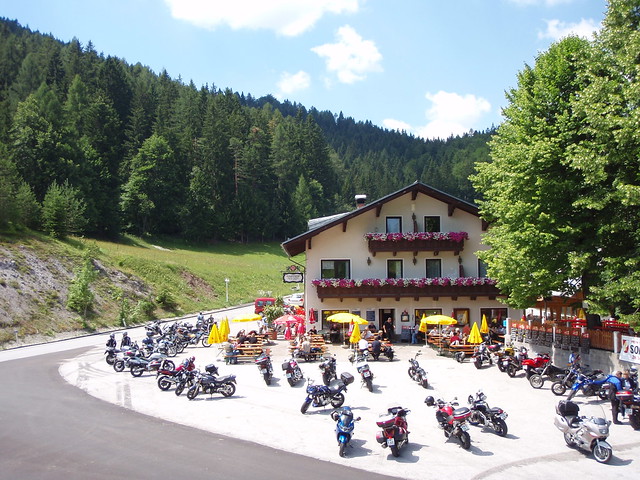 So though there was most definitely burning humiliation, it would appear the event was not witnessed in proportion to the amount of embarrassment I felt. And although I remember it to this day, no one else thought of it 5 minutes later – if they even noticed at all. Which brings me to my point, no matter what it is that you want to do, do it. Even if you do make an ass of yourself, not nearly as many people will notice as you think, and those that do won’t be thinking of it 5 minutes later.

And I only remember it because it was one of my first drops. The drops that came later fade into nothing (outside of a mudpit in Mongolia, and they all just blur into one sweaty mess of rage) until I really do not remember my last drops.  I know I have, but nothing special about dropping the bike. And when I do it’s either because of a lesson I forgot from the first couple of drops (don’t park your bike leaning into a dip – you are going to drop it) or an extreme situation (like the mudpit “shortcut” mentioned above).

My initial reaction that day however was one of thinking that if I could not even park my bike how would I make it all the way to Turkey, let alone back out again. But I did. With some bumps admittedly. But I did it.

So where am I going with this? Don’t let fear of looking stupid stop you from what you want to do. Be it going on an overland trip OR coming home early from it. Or putting your videos online or writing a book about your experiences.  At best you stopped yourself from something potentially awesome and at worst you prevented a learning experience. And for what? Fear people will laugh at you? There are far fewer looking than you think and those that are will almost always cheer you on or help if you fail. Those that do laugh and enjoy your pain forget it 10 minutes later. (Yes I know I said 5 above. But if people take pleasure in your pain they are spiteful and take a little longer to let go. So 10 it is. Then they move on and find someone else to make them feel better about their small lives). And you changed your life for fear of those 10 minutes? For that group of people?

2 Responses to Dropping Your Motorcycle: Perception Versus Reality