Sailing With A Toddler & A Dog: A 2 Week Adventure, Part 1 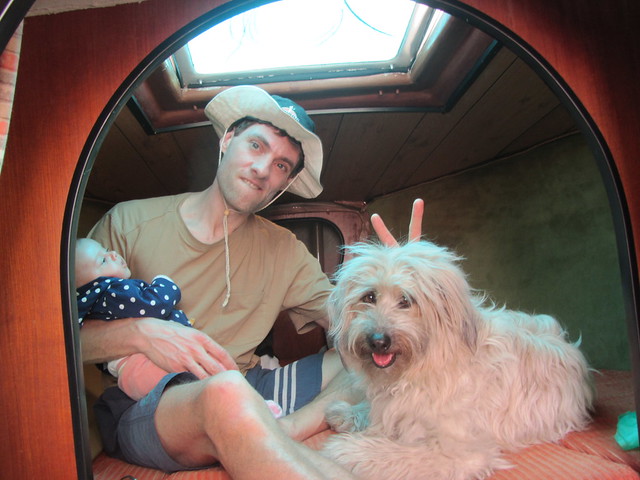 We want to sail around the world. By we I mean Patrick. My take is that I want to continue travelling and sailing seems like it could be a great way to do it. (That is asides from the ocean surrounding my babies part).

The pros include the freedom it allows us to have, the immersion we so miss now that our motorcycles are retired for the time being, the environmentally friendly travel, and it allows us to have our home with us. Something I know I like (no tent to build up and take down every day!) and something I think our kids will also love. Children love the comfort of the familiar. Having our home with us will hopefully make seeing exotic places more of an adventure and less fearful when they get to sleep in the same place each night. (If not in the same location!)

Baby on a boat! 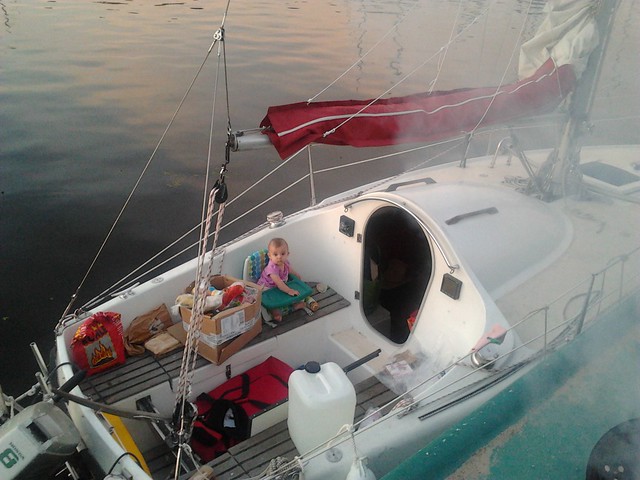 So despite being terrified of the idea of a little sailboat on a big ocean, and more particularly, one with my babies on it, I decided to give it a chance.

I have been reading blogs written by sailing families and I have been learning about sailing in general. Before we go I will have my basic sailing certificates and be able to sail. I may not have the same interest in sailing like Patrick does (for me it is all about the countries we will see and not the act of sailing itself) I do want to be able to do my fair share and take my shifts. Much more importantly however, I want to be able to sail and take control if something should happen so that Patrick can not.

However, for this trip from Stettin to Ruegen I was limited to occasionally taking over the tiller. Over the summer we wanted to get me sailing but we always went with our daughter. Every word Patrick said went in one ear and out the other as I was unable to break my concentration off of her. Now that she is in daycare I need to find a course and attend it away from her.

And so after motoring our boat up to Stettin the weekend before, the 4 and a ½ of us were ready for our 2 week adventure. It was Patrick, our 18 month old daughter, our dog Mango plus me with Berlin Baby the sequel snuggled in my belly. 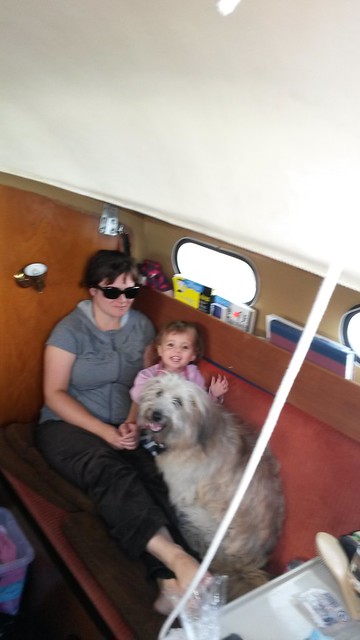 I was nervous about sailing while pregnant. 2 summers ago when I was pregnant with Emma-Justine we, along with friends and family, rented a house on an island on the outskirts of Berlin on Tegel lake. Even the ferry ride over made me sick. At the time the Pinguin, our little sailboat, belonged to Patrick’s cousin. I went out for a morning sail and had to be dropped back within the hour. I spent the rest of the day in bed. Unlike regular sea sickness that tends to abate as soon as you hit land, this pregnancy induced seasickness brought me to my knees. This baby however seems to be a born sailor. Not once was I sick on the lake over the summer. So hurdle one had been cleared. Now we just needed to see if the ocean would be so kind to me.

What we did not expect was that Emjay would be the one to get seasick!

We had read kids are normally 2 before they start getting sea sick. Apparently not our Emma-Justine. She had no problems on the lake, but on the rough water she had a different experience. But I am jumping way ahead of myself. 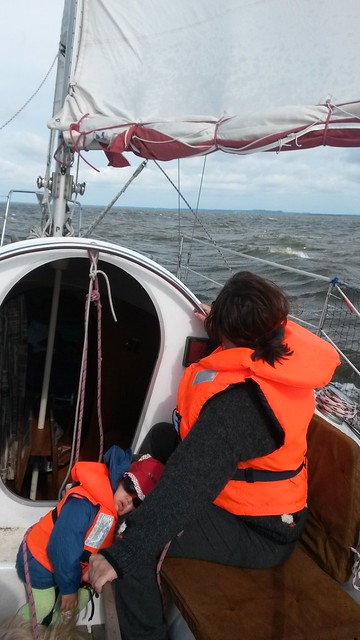 Although it did lead to the reinforcement of our hard learned number one rule of comfortable travel. You need time and you need to be flexible. If you are short on either your trip is going to be less fun at best and a nightmare at worst.

Despite taking the boat up to Stettin the weekend before, we still lost 2 days in the harbor there. We, as always, left the apartment much later than we had planned. Our 10 am departure was a 2 pm one. Not horrible, as it should have taken just less than 2 hours to reach Sttetten by car (and yes, 25 hours of straight motoring along the river) from Berlin. Still plenty of time to get the mast back up. Unless of course there is traffic on the highway. Which of course there was. Our 2 hour ride turned into a 5 hour one and it was after 7 pm when we finally pulled into the harbor.

We got the sail up no problem on Sunday, but we also wanted to get our front sail repaired. The sail shop was closed until Monday. We decided to spend another day in harbor as well as head into town and get some fresh supplies of baked goods and cheese. The day before we had run short of food and I was less than enthusiastic about how we had stocked our boat’s pantry. The Pinguin does not have a fridge and we didn’t take a cooler. So we had boxed milk to be consumed in its entirety a day at a time and a lot of different types of pasta and other kinds of nonperishable food items. Did I mention how much I love food? And how devastating such a pantry is for me? 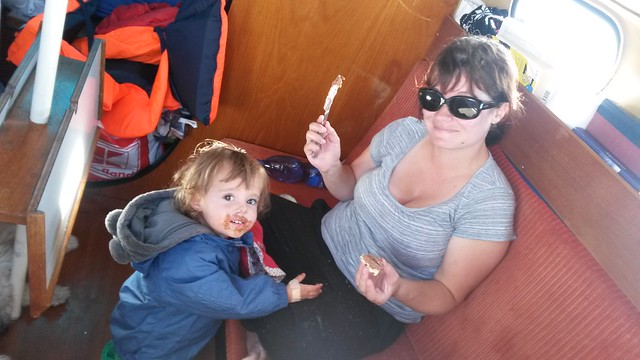 Monday morning rolls around and it takes only an hour to get our sail repaired. We are ready to leave before 12.

The only problem? 19 knots of wind coming from the direction we want to go. 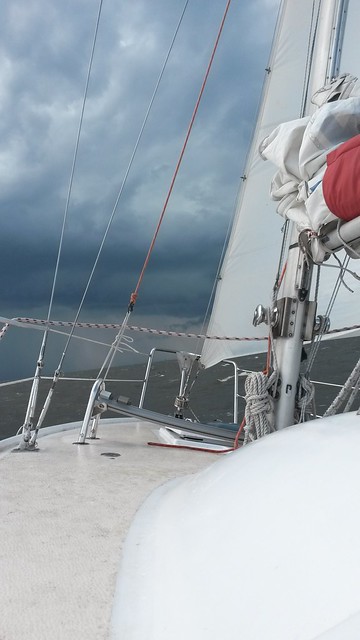 This is where if you have plenty of time or if you are willing to be flexible, you say you will stay. But these winds were called for until Thursday. That meant half our vacation would be over before we left. We did not have the time nor were we feeling very flexible. We wanted to sail. This was our mini trial. And 19 knots is not dangerous. Just uncomfortable. Plus I reasoned, this isn’t even the sea yet! Its just a giant lake!

Never underestimate the water. To say it meant for a bumpy ride was an understatement. And when Emjay seemed to be extremely tired we chalked it up to normal naptime. Small children do not get seasick! Which meant putting her in the absolute front of the boat where the bed is also made sense. She was safe in there from rolling out onto the floor. No matter how it is the most unstable part of the boat. Kids under 2 don’t get seasick! 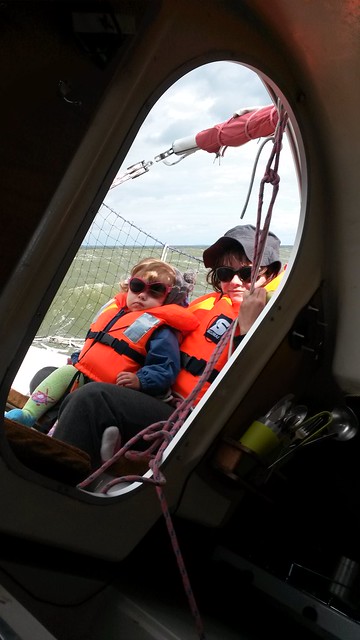 Within half an hour I heard her scream over the wind and the waves. I rush down below to see my baby was covered in chunky puke. And she was less than impressed with it.

Despite the rocking I manged to swoop her up and cuddle her on the bench while cleaning her up the best I could with the rolling waves.

And then she vomited again.

I was now really scared. Was she seasick? Or was she honestly sick? Her little body had gone limp in my arms and she looked terribly ill. This was my worst nightmare outside of having the boat sink. What if we were sailing and in the middle of an ocean passage one of the babies became really sick?

Add to that our dog. Mango had given up on the day long before Emma-Justine. He hates waves. Has since he was a tiny pup in Thailand. He had retreated down below shortly after the day began. Now he decided he had to be in my lap too. No matter I was nursing a sick baby. One whom I had even given up on changing out of puke covered outfits. Instead I was mopping her up the best I could. I tried to move Mango as my concern did not extend to him at this moment. He wasn’t budging. Even once the puke hit him. His look plainly said “Don’t care, I was here first, this is as bad as the airplane ride and the black box of death. You want me gone, do it over my dead body. Otherwise I get your lap.”

Mango moments before he gives up and heads down below. 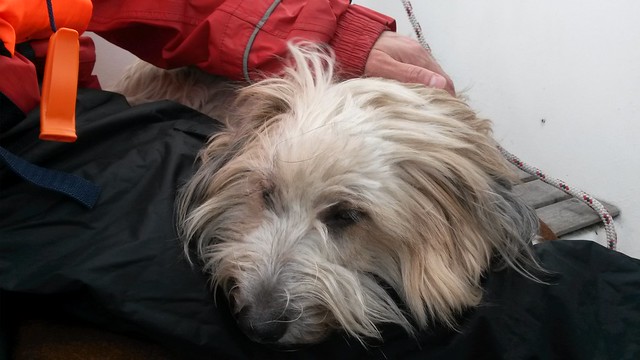 Although I had not been seasick up to this point, being down below where the rolling was way worse than being in the cockpit, and surrounded by puke, including that in Mango’s hair, my body gave up. I too joined in the puke fest that was our first day of sailing.

And so Patrick abandons sailing to turn on the motor. Only the motor comes off in his hands.

I can’t make this shit up.

Thankfully he did have a hold of it, and the motor did not sink directly to the bottom of the lake. That was not what I understood at first. And so I began to cry and curse and generally hate sailing.

Moments later we put the goose down below. 10 minutes later the pukefest began. 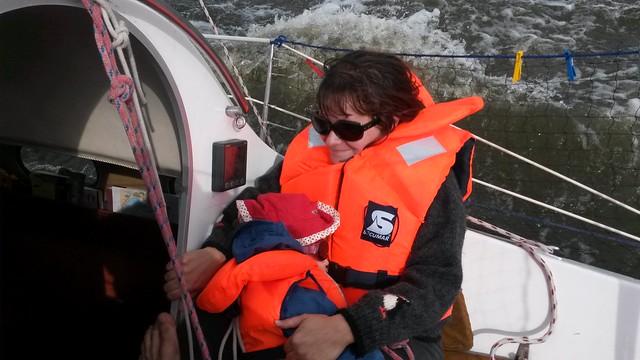 He finally communicated to me that he has it in his hands, he just needs something to bind it with, and so I, in a super human effort of removing myself of 20 pounds of scared dog while cradling 20 pounds of limp baby, in a boat that is being tossed around like a child’s toy, get out some straps and Patrick binds up our motor.

And continues to sail.

Something that at that point I am ready to swear off for the rest of my life.

About an hour of torture later, which feels more like days, we limp into a a harbor. The winds drop significantly as soon as we sail into the shelter of the bay.

As soon as the boat is moored I take Emjay onto land. I am ready to run straight to a hospital but she is magically and almost instantaneously transformed.

Life returns to her eyes and her limbs. No more puking. Instead she is running around and chasing Mango, who is overjoyed to have lived. 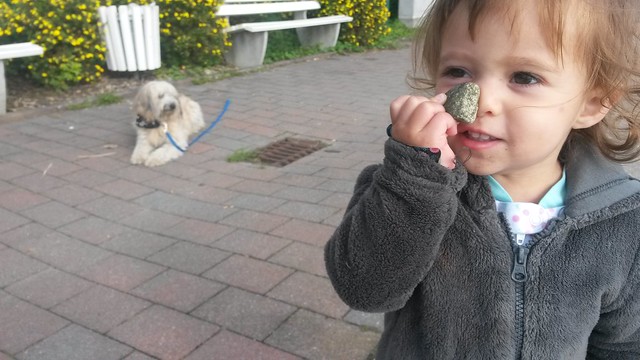 And so I washed out the puke from the clothes and blankets while Patrick washed it out from the cabin. And we both agreed we needed a day on land to recover. Or rather Patrick suggested it when he saw the look in my eyes when he asked if we wanted to stay one night or two. The sailor among us knew that the day was not exceptional. It was a bumpy ride against the wind. The non sailors were all shell shocked and emotionally scared. If this was sailing???? No thank you. I was one wrong word away from taking my baby and finding a train or bus, or even walking, back to Berlin.

And although on Monday evening I was convinced I wouldn’t ever sail again, a day on land revived my spirits. And on Wednesday we set off again.

This time however Patrick had a rift in the sail. And the rest of our week was in fact really lovely. This post is long enough however, and next week I will post the conclusion along with lessons learned.

Safe in the harbour, you would never say that outside the wind is rather strong! 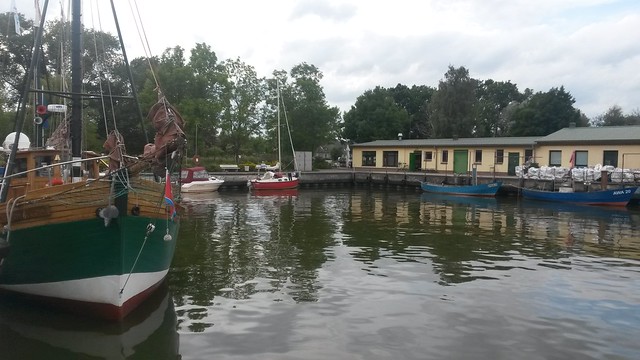 One Response to Sailing With A Toddler & A Dog: A 2 Week Adventure, Part 1