I am presently writing the first draft of what will be the book of our motorcycle trip  from Germany to Turkey and back. I keep swinging back to the prologue. How much background info is really needed? This was our first trip where we both rode our own motorcycles – up until that point I had ridden pillion. Getting my license a week before we left was a big deal to me. But does anyone else care? So, keeping in mind this is a first draft version, which is mostly ideas just starting to get down on paper, as a reader, what would you want more ore less of? Should this even be a topic? Or should I summarize this into a paragraph and jump right into the trip?  (Also my sanity was at a breaking point before this trip, which taught me just how important what work I do is in my life.  Again, though on the one hand I would tell everyone to break from the insanity and go on a trip! But then would you listen to the crazy lady?)

Let me know via email or in the comments section (our email is the title of our blog followed by gmail.com!) and as a thank you Ill send you either a free copy of the Motorcycle packlist from Smashwords, or let me know what book you would rather and Ill send you a 50% off coupon for the book at Smashwords.

Beneath me the Black Devil shuddered to a halt in the snow. Torn between tears and rage, I choose to let vent to both. Screeching like a banshee I hurled the Black Devil to the ground and proceeded to jump up and down on it for good measure. I was aware that my sanity was very much in question and yet, simultaneously, I felt that this was the only action that would enable me to hold onto what scrap of it was left.

The Black Devil is what I christened my Simpson Schwalbe, a moped out of the DDR (the Deutsche Demokratische Republik, or East Germany). And this was not the first time the devil had proven to be unreliable. In fact, the only thing I could rely upon is that she will crap out just when I need her the most.

Exhausted, I slumped down onto the curb and reached into my jacket to fish out my cell phone and call Patrick. On the screen I see I have a missed call from him. Turns out, thanks to the late and unexpected snowfall, this mornings motorcycle lesson had been cancelled anyway. I hurl some choice words at Patrick before hurling the phone across the street. That merely meant I needed to fish it out while waiting for Patrick to come pick me up and rescue the Black Devil. 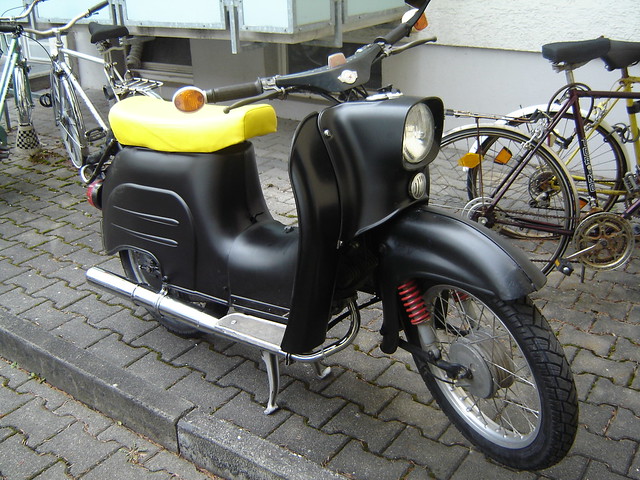 I had met Patrick in Seoul, South Korea, where we were both English teachers. I had signed on for a year, Patrick was a substitute teacher who was replenishing his travel fund. He had ridden his motorcycle from Germany through Russia and Mongolia, then came by ferry to Korea. His next move was shipping it to South America where he would continue his trip. I was smitten. I then joined him on the back of his bike through Argentina and part of Northern Chile. At that point any chance I had left was gone. I was in love with him and motorcycle travel. I just needed a bike. And a license.

An essential difference between Germany and Canada is that unlike in Canada, in Germany you can only practice driving with a licensed instructor or in an enclosed compound like the ADAC (Germany’s national automobile organization) training grounds. That means 40 Euro for 45 minutes of road time, be it on a bike or in a car. Or 10 Euro an hour on a compound with a lot of nervous teenagers who are driving in a car with their parents. Neither is ideal. Like it or not, I still needed to practice riding on the road in order to pass my test.

I already had a valid German drivers license for a car. Germany and Canada have an agreement where you simply transfer your license from one country to the next, no further testing required. Even if I had had a motorcycle license however, no such similar agreement existed. In Newfoundland you have to do a full day of on the bike training. But outside of one day on the parking lot and a written test nothing more was needed. Driving schools offered them, and heavily recommended them, but they were not required. Since you could jump on your bike and have a friend or family member follow behind you in the car, few people took the schools up on their more expensive (albeit professional) option. Even the official test was to perform the emergency evasion manoeuvres followed by a drive around the block. This is in direct contrast with Germany, where the minimum amount of hours that you must do with an instructor is 12. These include a set amount of highway hours and riding at night. Then, if are still not ready for your test, you sign up for extra hours or head to a compound. Germany must have seen the Canadian license as a case of “here’s your license, now try not to hurt yourself.”

We did find a loophole. Since I had a car license I was allowed to ride a moped that went under 50 kilometres and hour. And the Simpson Schwalbe was a loophole in and of itself. It was a small motorcycle with a moped frame. As it was produced and classified as a moped in the former East Germany, it meant that it was an exception to the 50 kilometre ruling that my car license entitled me to drive. And so I had a mini-motorcycle that looked like a scooter, required me to use a clutch to switch gears and could hit 60 kms an hour. I already had purchased Betty, the BMW F 650 GS that was to be my faithful companion on the ride to Turkey and back. I could practice my evasion moves with her on the compound and use the Black Devil to ride around the city and get used to German traffic rules. It seemed like a brilliant and cost effective way to prepare for my test. And so we bought the Black Devil, that beast I was so proud to own, and whom brought me as many tears and moments of intense hatred as moments of bliss and love. The very beast I had just attempted to stomp beneath my feet. 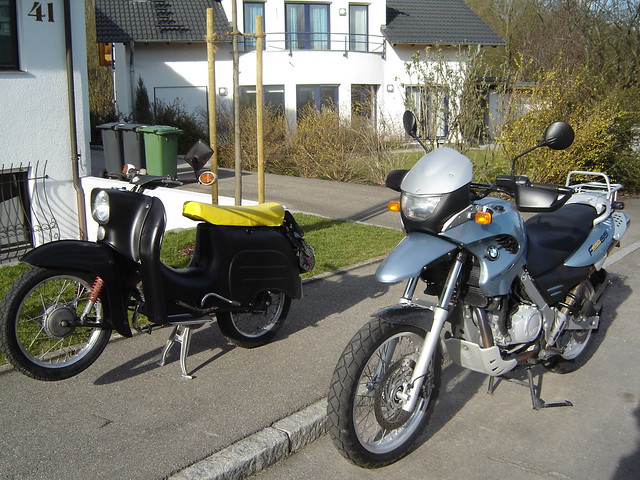 In fairness to me, the fact that I was so overworked explained some of the meltdown. Freelancing meant I would be able to take 3 months off of work come July and fulfill the dream of my first major motorcycle journey. I would be able to walk back into my courses that October and pick up where I left off. It also meant I was not going to have any income for those 3 months. And so in addition to saving like a maniac, I was also taking on extra courses so that I could pay for the dream trip.

Adding to this stress was the Black Devil. Riding her to work seemed like a way to get practice in. Except, as well behaved as she was on weekends, as soon as there was an appointment I needed to make the monster would stall …. and refuse to come back to life again. The first time this had happened was on the way to my a class with a a company that was not known for its sense of humor and was generally disliked by all the trainers sent there. (In fairness to them they liked us about as much as we liked them, but I digress). The same company that I got lost trying to find on my first day of class with them when I had mixed up which train stop I was supposed to get off at. Which had been a mere 3 weeks before. Since the train had been such a disaster I thought riding the Black Devil was a perfect solution. Up to that point we had been getting along so well.

Halfway there I stalled in the middle of nowhere on a road that was little more than a forest path. A deserted place that the few cars that happened along choose to proceed past the girl who was running around in circles screaming and stopping only long enough to jump on her upturned (from my kick) scooter before she would jump off and run around in circles again. (I really needed that vacation!).

Cue retired BMW riding gentleman. Who to his credit showed no fear, quickly determined my spark plug had vibrated off, and reattached it for me. And all this old man wanted in return was a kiss on his cheek for his work. Which I promptly gave.

And so the Black Devil had been retired from her duties of getting me to work. My sanity was too fragile to handle it. But I really thought she was more or less fixed. She had been running smoothly and without problems for about a month. And I thought it was more or less safe to allow her to take me to my first motorcycle lesson. After all, that was fun and the Black Devil had always been for fun!

But perhaps the Black Devil had in fact been trying to protect me from myself. Just as I was working too much and this was doing definite damage to my psyche, motorcycle lessons from the school I had signed up at proved to be an exercise in masochism. Less instruction on what I should do and more roaring about what an idiot I was for not knowing instinctively how to do it. Which of course made me nervous and caused me to drop the bike more than once. Which extended the number of hours of hell I was to participate in.

So it is safe to say I was terrified when my test was set for the Saturday that was exactly one week before our planned departure date. Neither one of us had a back up plan. I still have not decided if the reason I hugged my instructor when I passed showed just how ecstatic I was or if it was a case of Stockholm syndrome. Either way, we were ready to ride. To be fair, I never doubted that we would go on the trip. Just the timing.