We Bought A Boat

So we did it! We sold the Pinguin and bought our bluewater/cruising boat. We spent over a year looking at various boats with various price tags. And in truth we almost did not look at what was “Heavy Metal” but is now to be rechristened Falcor (yes, after that Falcor. More on that later!). At 9.5 meters or just over 31 feet we were not entirely sure it would be big enough for our family. Plus it was located a 4.5 hour drive from Berlin. At the time I was very pregnant and our daughter was just short of being 2. A day of driving would only be worth it if we were seriously considering the boat.

It had everything we wanted though. Auto pilot, wind vane, solar panel as well as a wind generator, radar, AIS, a life raft and the list went on and on. It was basically ready to sail around the world. And though it had not gone around the globe, it had just returned from it’s second trip from Germany to the Caribbean and back. And the guy who had did it was giving a presentation on his most recent voyage. The presentation would be the deciding factor.

Long story short, we left the presentation with longing in our hearts (me for the Caribbean and Patrick for sailing there and around) and we agreed to at least look at the boat. Uwe’s first trip with the boat had been 4 years and his second lasted 2. We were confident the boat could handle the sailing we hoped to do. We were still nervous about size however as he had done most of it single handed (or with the occasional visitor).  That did make for a major plus side – one person could handle the boat. And although I still plan on learning how to sail, I don’t want to have to sail it on a regular basis. So maybe this Heavy Metal was ours and maybe it was not, but it was worth the 8 hours of driving there and back to check it out.

8 months pregnant, freezing and yet very happy. We all loved the boat.

And much like when I first sat on Betty and knew she was mine, stepping into Heavy Metal there was a click.

It was true it was not a big boat. But the layout was everything we wanted and maximized the space it had they way we wanted it!

Our first look in

My number one complaint was solved immediately. I could stand to cook and it was separated from the living room (salon)! But this request was easily met by most of the boats we had looked at. What made Heavy Metal different was that despite being only 9.5 meters, the front of the boat had the feel of 3 distinct rooms. The kitchen and navigation station were followed by the living room. And instead of the salon being sacrificed in size the front berth was instead. This was not a problem for us at all, as the back was a berth that could not only fit all four of us at the moment, but had enough head room that I could sit up and change a diaper there without whacking my head off the top. (This may not sound like much, but trust me, for sanity’s sake, the less whacking of my head off of things the better.)

The front berth is big enough to easily sleep both our kids when they are a little bigger and for now can be a place for Emjay to play. And the back of the boat where the larger berth is has it’s separate entrance, which means I can put Kai there as we sail and be able to look down at him whenever I want. More importantly I can jump down to him in an instant. This is huge as with Emjay in the Pinguin it was a fight to the front.

Emjay on the Pinguin, so far to get to her! (Although here we are not sailing) 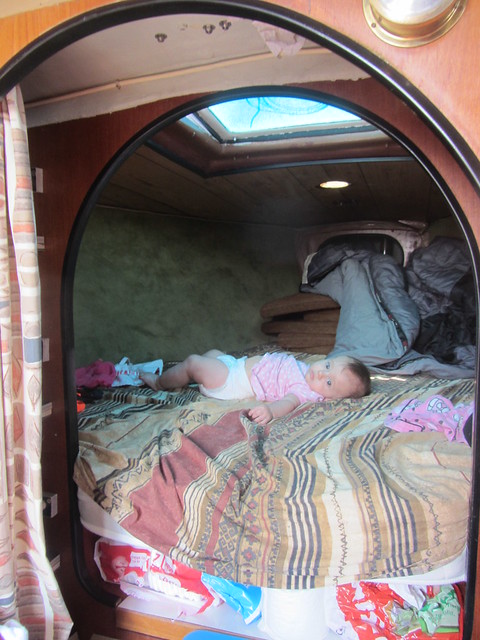 With Kai it will be much easier! It’s just a matter of opening the hatch!

Having breakfast on Falcor, hatch in the corner!

Open hatch and there is baby! (although he’s not there, he’s in Patrick’s arms) but you get the idea!

And so we bought it with the agreement that everything was dependent on a test sail in May. April saw a lot of weekends where Patrick was gone with Uwe working on the boat together (painting the boat while it was still out of the water, getting the mast up and finally the test sail).  And as of May 3rd the boat was officially ours! And the weekend past we did a live aboard test. No sailing, just testing out what it was like to spend the long weekend on the boat. Falcor passed with flying colours! In fact, it seemed to get bigger rather than smaller!

We had hoped to get a head start on clearing out what we did not want or need and start making the inside more “us.” But the only thing we succeeded in doing was making a giant mess. Which is really “us” as we are far from tidy. Although we have promised each other for sanity and safety sakes we will keep the boat tidy. It’s taking longer than we expected to get the initial “gutting” done so we can start putting everything in its place. But we still have time! I want to Marie Kondo the place.

We’ve already begun to make a mess, but there is a method to the madness! We hope.

So more to come, but the important thing is we have made a massive step. We bought a boat.

6 Responses to We Bought A Boat